I’ve tried a lot of monitoring tools for websites and servers, tools like Pingdom.com, Pingfinity.io, New Relic, StatusCake.com. All tools work great, and I use all of them on a daily basis, it seems like overkill to have 4 monitoring services running, but whatever I’ve also started using cloudstats.me.

I actually found the site while I was browsing WebHostingTalk some day, and I wanted to give it a try, because it was free anyway. I signed up, and all I was asked, was to run a simple installation script, what it does, is to make some folders on the file system, download some python scripts, and make a simple cronjob that runs every 4 minutes.

One thing I really like a lot, is that it gives a collective overview of all your servers added to the site, I know it doesn’t really tell much about each server, but still quite fun to see total amount of disk space, memory, CPU cores etc on all your monitored servers.

They also have simple service checks like HTTP, FTP, NFS, Mail, Database, SSH and DNS monitoring. Sadly, the only thing it does is to do a telnet to the server on those specific ports. But whatever, it works.

Digging down on a server specific level, it will show stats like CPU usage, Running Processes, disk IO, Server Load. A simple process tree, as well as the Uptime of the system, and one thing I really love is pending updates on the server.

In the end the tool provides very basic information, but they show it in a nice interface, and they do basic monitoring, if a server doesn’t respond for 5 minutes, they will mark it as ‘Down’ and send you an email. They even have ‘URL Monitoring’, it keeps track of the response time of the request, and will also send you emails if the status code is 400+. What I don’t like is that it only checks every 10 minutes, even for paid users.

I don’t see myself using the tool to actually monitor anything, I don’t know how reliable it is, and I miss some extra configuration, and more frequent testing of specific things.

But hey it’s free for the first 3 servers, so if you want a nice looking interface (It’s based on bootstrap), for your server to see specific information, give it a go.

In my own opinion, New Relic still beats CloudStats, and is good for reporting and more in depth information about processes etc.

Here’s a screenshot of the server specific overview, it’s tested from a VPS running for testing: 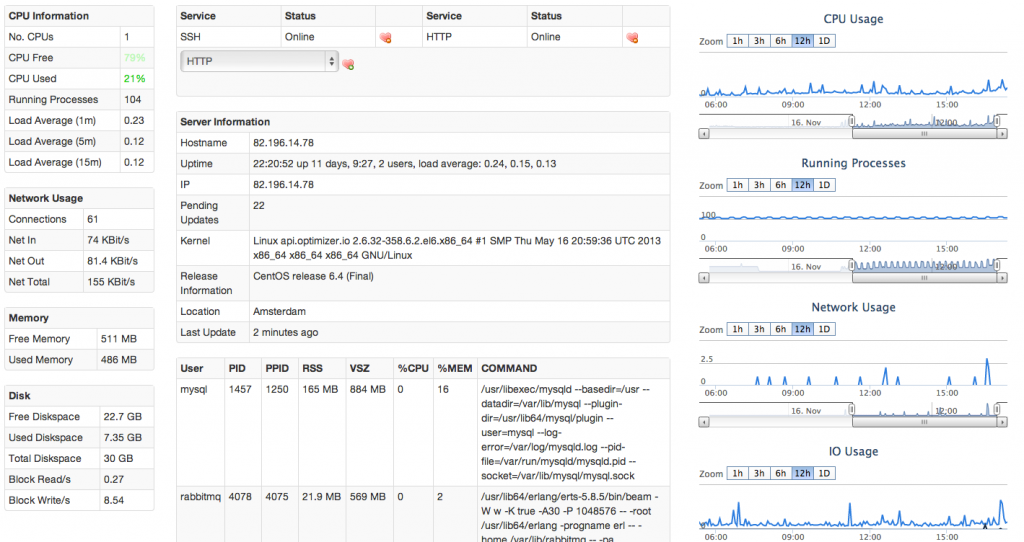